The Steam community overlay is an in-game interface that allows access to many Steam Community features while playing games. The default keybind of Shift+Tab will open the overlay in any game where it is supported and enabled.

Beyond giving access to Steam community features, many games utilize the overlay in the background to support in-game features that require Steam. You may not even realize that a game is using the overlay in these cases.

Because the Steam overlay is a customizable Steamworks feature, games will use it differently depending on which features it supports and how the developer incorporated it. More detailed information can be found in the Steam community or by contacting specific game developers.

What can the overlay be used for?

The overlay interface does not open when pressing its default shortcut (Shift+Tab).

The first thing you'll want to do is make sure that the Overlay is actually enabled and that your keybinding is correct. Specific instructions can be found below.

If the overlay is still not opening, make sure to follow all the Basic and Advanced steps in this article.

Because the overlay is a supplemental component of the game you are playing, it will be automatically closed should your system's resources come under heavy load.

You'll want to make sure that your system is in a good state by updating all major drivers, limiting the amount of programs running during gameplay, as well as updating your operating system to its latest version.

Detailed steps can be found in the troubleshooting sections below.

Steam has a global setting that will enable or disable the Steam overlay:

Open the Steam client and navigate to the Steam > Settings/Preferences > In-game tab. Check the box next to Enable the Steam Overlay while in-game. 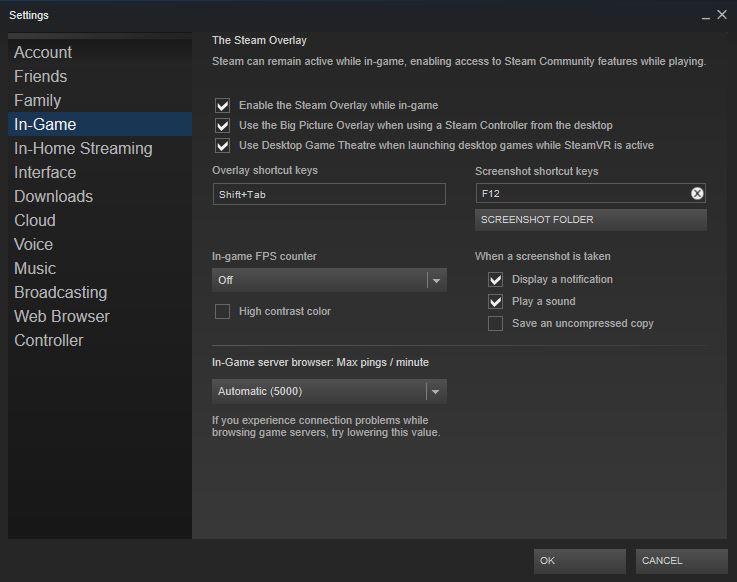 Additionally, you can turn on/off the Steam Overlay per game...

The Steam shortcut allows the overlay to be opened in-game. You'll want to double check that you have it set correctly.

The following steps will ensure that Steam is in a good state for the overlay to work. These can be performed with a minimal amount of technical knowledge.

It's always a good first step to make sure that you restart Steam as well as your computer.

Restarting the computer flushes all kinds of system states and caches, while resetting other programs and releasing locks on files and other resources.

Sometimes files on hard-disks and other storage devices become corrupted. Some of these files may be associated with the way the game utilizes the overlay. Verifying local files can fix this.

The Steam installer can be downloaded here and reinstalled to the same location where it is already installed.

This will ensure that all files required by the Steam overlay are in a good state. This process will have no effect on your installed games.

If the overlay is still working correctly after following the fixes outlined above, it is possible that something outside of Steam is responsible.

Because these are advanced troubleshooting steps, we highly recommend that you contact a local IT support specialist in your area for further assistance with these steps.

Certain firewalls may prevent Steam from communicating with the game that requires it. You'll want to work with a tech support specialist to ensure that the Firewall is not interfering. You may even need to temporarily disable it for testing purposes. It may be necessary to add exceptions in your firewalls for Steam.

AV software hooks very deep into user systems and can affect disk and network operations which will cause issues with Steam. Some games also use copy protection technology that can appear as malicious software to an AV scanner, resulting in potential false-positive alerts.

You'll want to work with a tech support specialist to ensure that your AV software is not interfering with Steam. You may even need to temporarily disable it for testing purposes. It may also be necessary to add exceptions for Steam in your AV configuration (for example, excluding Steam Library folders from live monitoring services).

Any software that modifies or monitors system, disk or network activity can cause issues with the Overlay's functionality. These programs and services can run in the background and are typically associated with software like Anti-Virus, ad-blockers, web-optimizers, firewalls, system cleaners, recording software, proxies, performance boosters etc.

You'll want to work with a specialist to ensure that no outside software is interfering with the Steam Overlay.

If your system is at or below the required or recommended specifications for the game, the overlay may have difficulty functioning correctly.

You'll want to work with a specialist in your area to consider upgrading your operating system, or even the hardware that your system uses.

Programs Which May Interfere with Steam

Disabling Background Applications
Back to Top